An other worldly place, from extreme weather changes to landscapes you have never witnessed before, rich with nature’s beauty as well as potentially deadly forces, visiting Iceland is something that shouldn’t be missed. 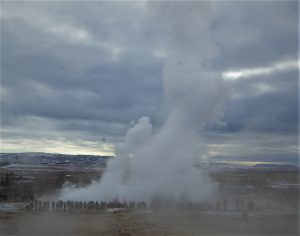 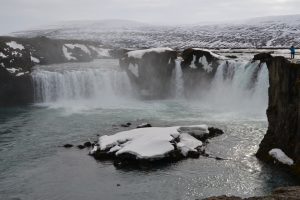 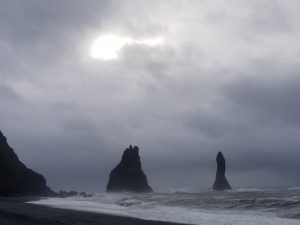 Nature, in this amazing place has driven the people living there to adapt by enjoying its mystery and challenges. Visiting Iceland, you learn from the locals about the history, the mysterious tales of trolls and fairies, the challenges from volcanic eruptions to boiling waters in lakes and streams, and the great love they have for this amazingly beautiful island.

If you only have the time to visit the popular Golden Circle area, then do it to get a glimpse of this island’s rare natural sights. But really, to get the full understanding of life and nature on this magnificent island you should, like we did, travel around the full circumference. 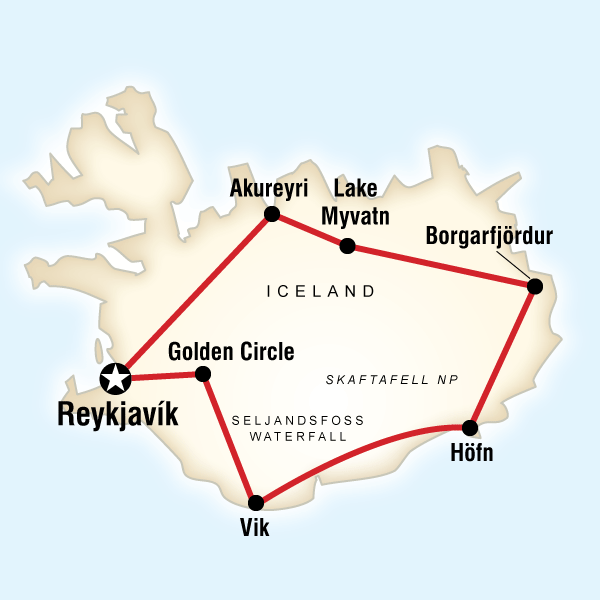 A small group of likeminded adventurers, we traveled in winter wanting to see the contrast of the fire always brewing under the surface, and the ice and snow. We were also searching for a glimpse of the Northern Lights as Iceland has a reputation for brilliant displays. One week earlier and we would have had the best light display of the season, but for us, even with many clear nights, nature didn’t provide her artistry in the sky. Although a bit disappointed, the magnificent snow covered landscape with steam vents visible, steam coming off the lakes, and freezing temperatures as we luxuriated in hot springs definitely made up for it. There is nothing like Iceland in winter. Hands down it made all of us curious to return in the warmer weather to see the contrast of the seasons on the landscapes.

Some of our group went to the famed Blue Lagoon on arrival, but were delighted in the decision to travel out of the heavily touristed areas around Reykjavik and soak in natural hot springs where locals go. You have to travel around to the north and west of the island to get this fuller experience. We even visited an underground spring that until a few months ago was used for luxurious soaks, but the water has become too hot so we could only climb down to the pools to take a look. It was beautiful. 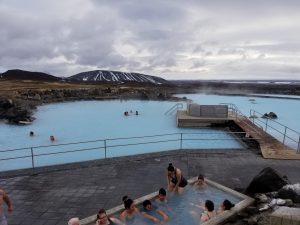 Myvatyn on the North Side of Iceland

The underground hot spring have become too hot for bathing, we climbed down to take a look.

Climbing down to hot springs 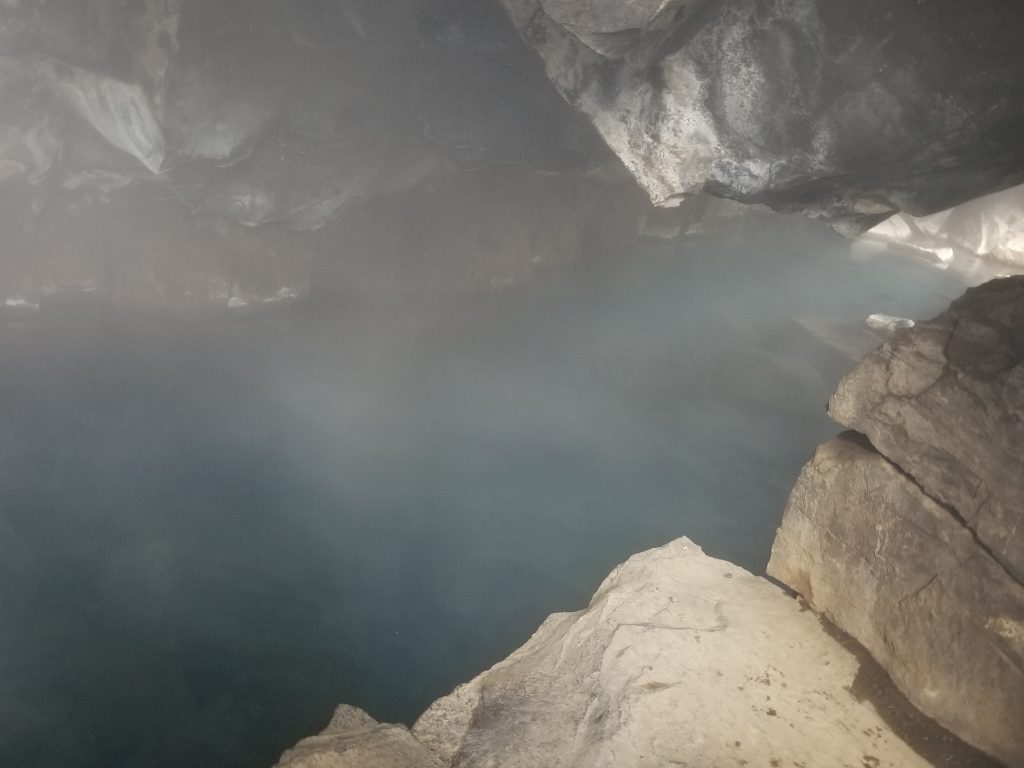 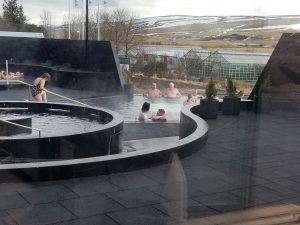 Another more local bath house on the west side of the island, Krauma, geothermal baths & spa at Deildartunguhver

Even the horses in Iceland have a magical quality. Literally thousands of gorgeous Icelandic ponies dot the countryside as you drive around the island. The western areas had the most pony sightings. Just pull over and they come looking for a scratch behind their ears, hoping for a treat. In winter, the horses are let to roam free enduring all types of weather with their bushy manes and furry coats. 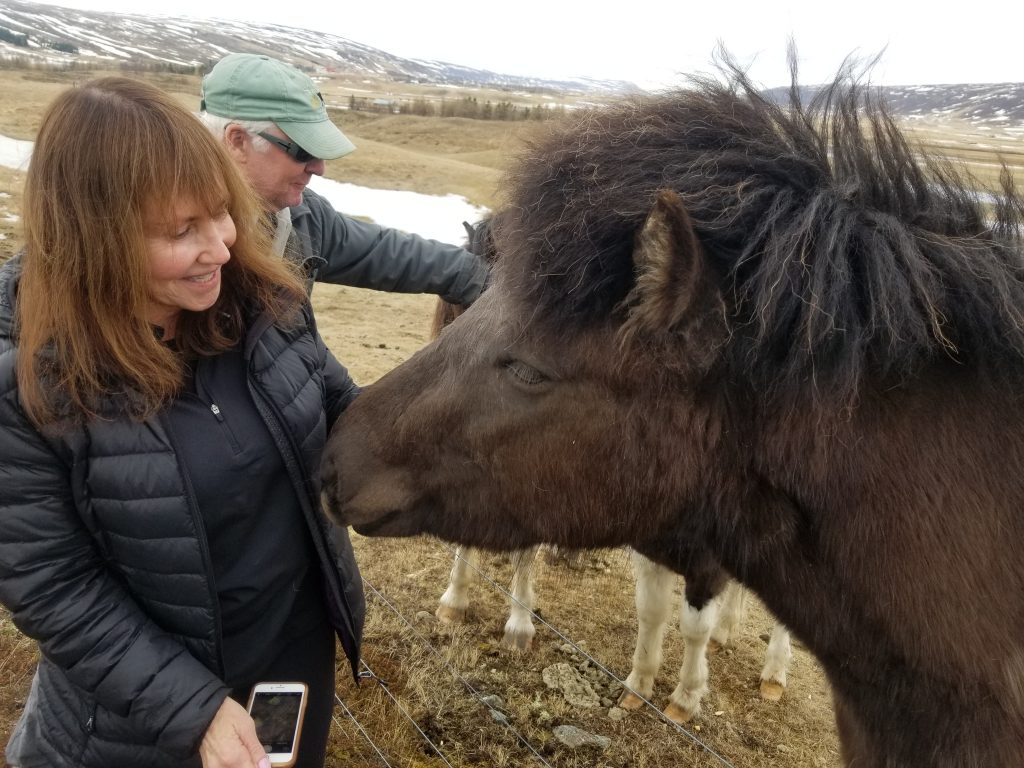 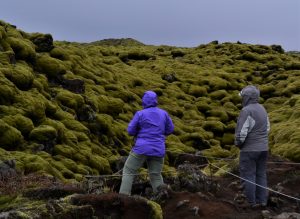 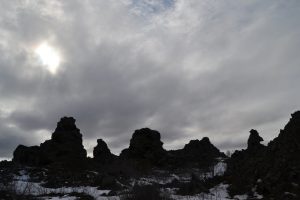 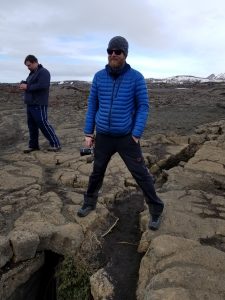 Hilmar standing with a foot in each continent. On the North side of the island, the crevasse is much smaller. On the south side, you can walk in the divide where the 2 tectonic plates are separating.

The Viking history is still prevalent in everyday life on the island. Stories of the treeless landscapes and their great ancestor Ingólfur Arnarson who brought life to Iceland, is truly amazing to learn about. It’s no wonder the original settlers sent back stories of danger and extreme challenges in living there to keep the magic and wonder of this magnificent place all to themselves. That’s why the icy Greenland was named ‘green’ while the luscious country of Iceland was named ‘ice’. The early settlers wanted to confuse and discourage new arrivals. 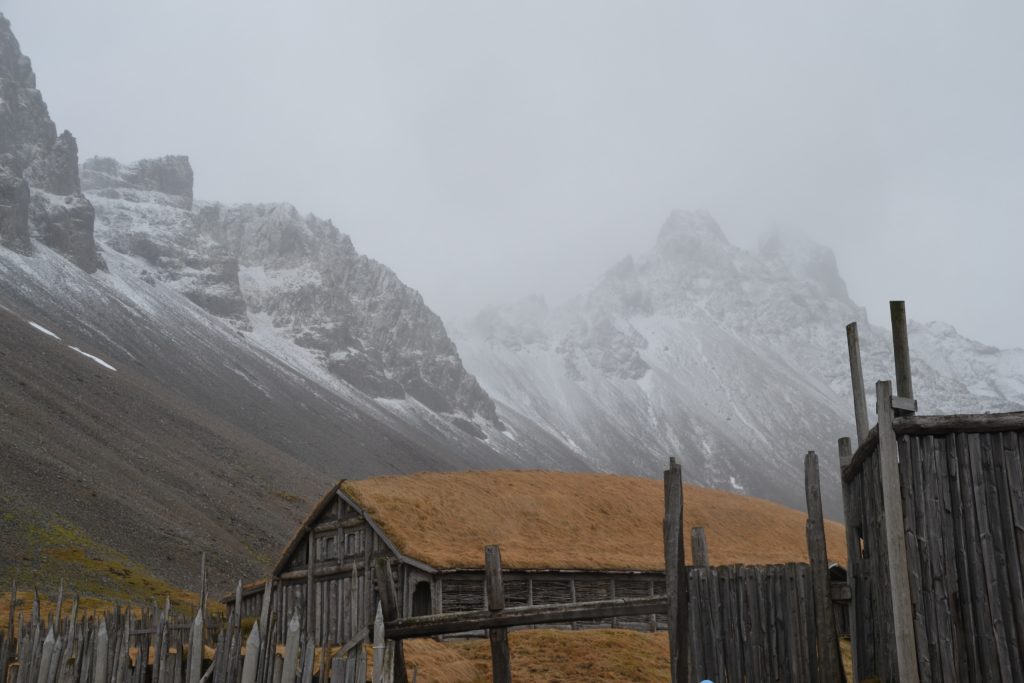 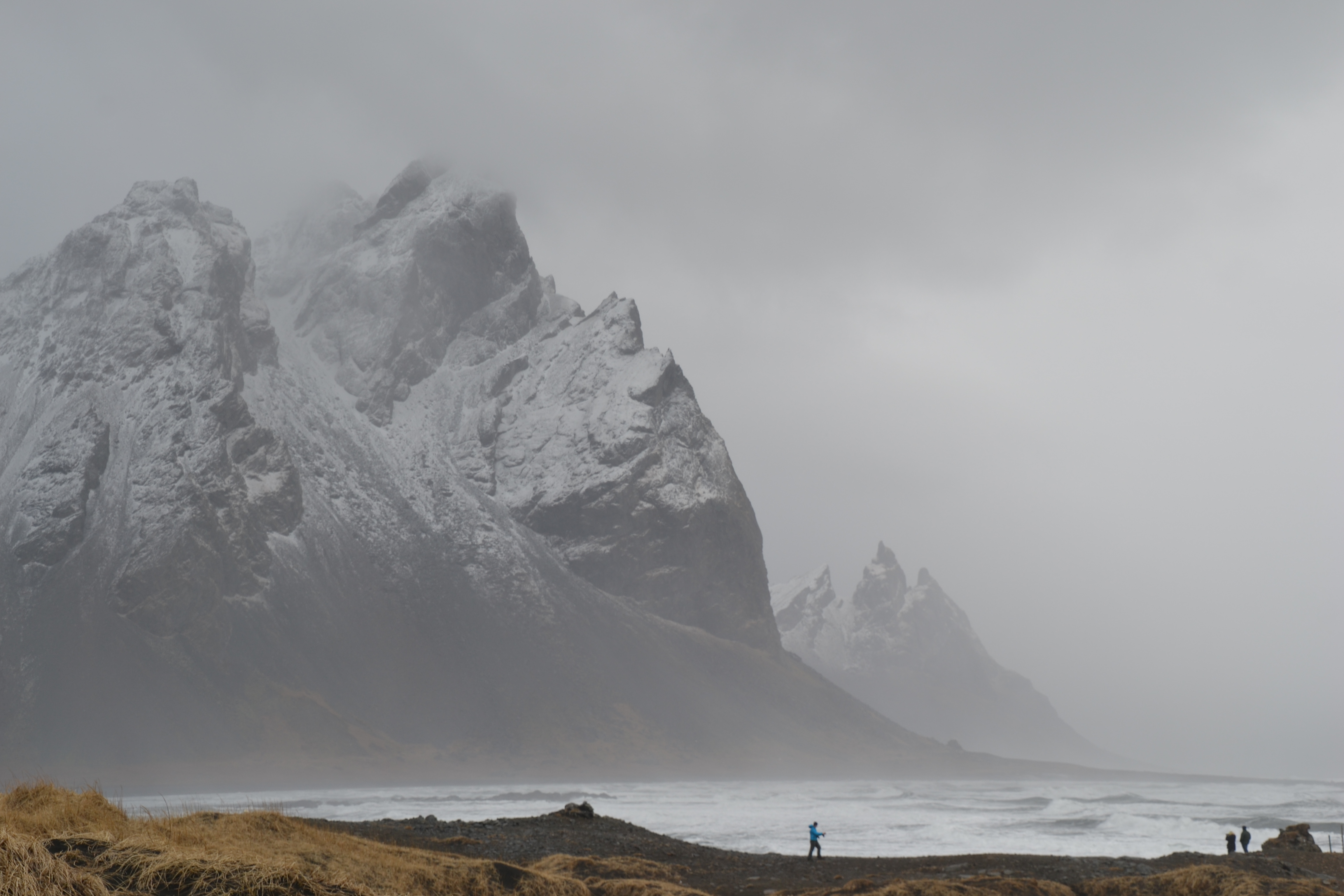 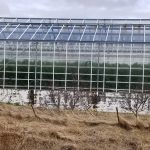 Tomato plants growing almost to the top of the greenhouse 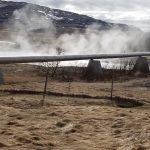 Plenty of heat coming from your radiators, with practically no cost, so people keep their windows open in the winter to keep fresh air in their house. You drink the purest delicious water out of the tap, hot water coming to your shower directly from underground, these things were unheard of to us. The advantages of living in a place with thermal power continually amazed us. The reminder of the boiling heat and power underground were constant in our travels. From stories of volcanic eruptions to giant plants in greenhouses, black sand beaches from lava flow, basalt formations, geysers erupting and hot steam vents, we sometimes were amazed at how the Icelanders took this boiling danger under their feet all in stride. 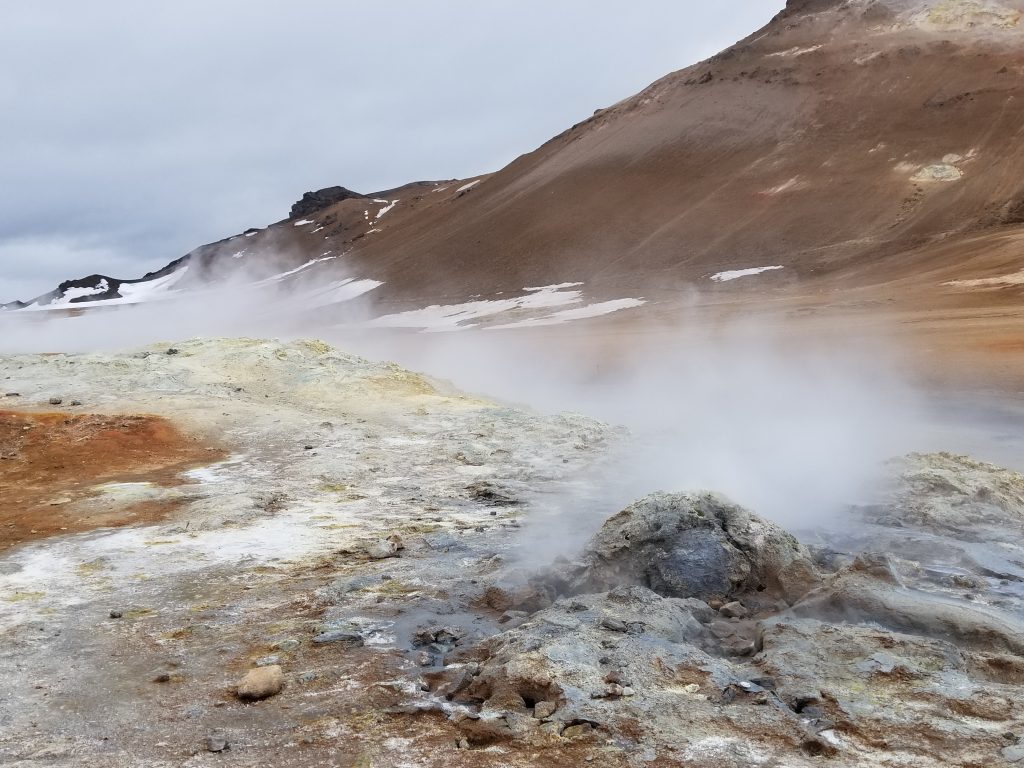 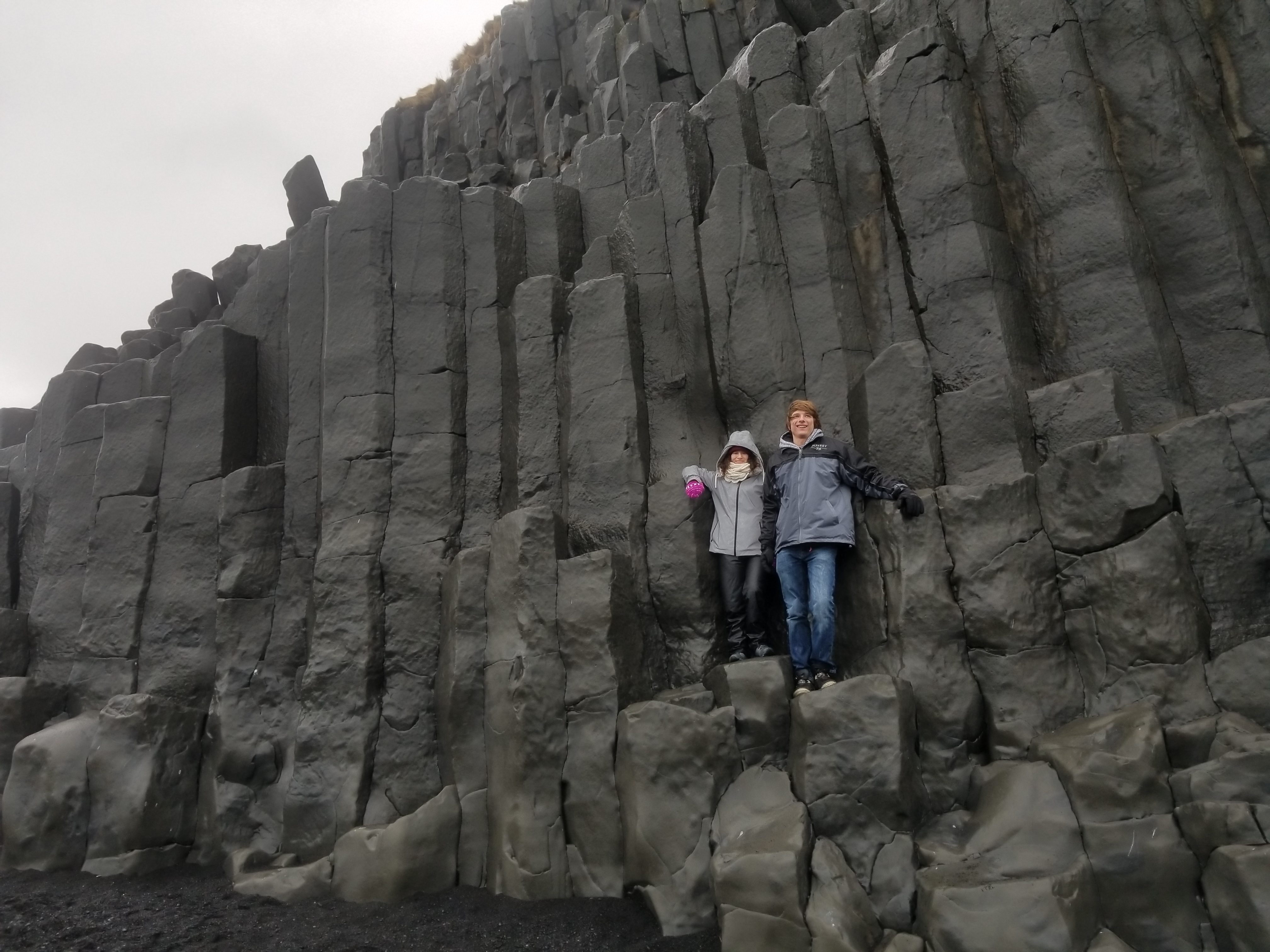 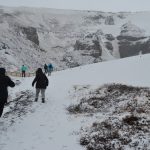 Trudging through snow to the waterfall.

Contrast that with extreme changes in weather. From 40 degree mornings to violent winds, freezing temperatures and snowy white outs in the next hour. The weather is very challenging, especially in winter. The locals weren’t phased, but we were continually shocked by the drastic changes. Lots of layers pulled on and off throughout the day as we traveled around the island and got in and out of the van to explore. 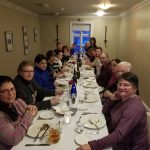 Food was amazingly good in Iceland. Fresh seafood every day. So fresh we called a hotel around 11 to find out what was for dinner and they asked us to call back later in the afternoon because they needed to wait for the fisherman to see what they caught that 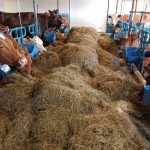 day. The lamb was tender, flavorful, and more like the best steak you ever ate, than the more gamey tasting lamb I had been used to. We ate with the cows behind glass at one farmhouse restaurant, amazingly delicious cheese. 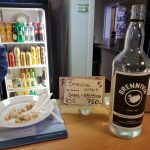 An in case you want to try a local custom, fermented shark and black death liquor. 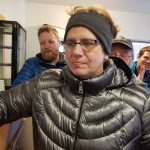 A bite of fermented shark… 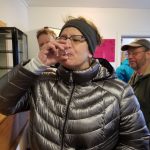 And a shot of Black Death! Deb was the first brave soul to try it!

If Iceland isn’t on your bucket list, add it. To get a bit of everything, plan your trip in October or April, unless you want to experience the winter there, to get a full appreciation of this land of fire and ice.

Enjoy a few more pictures of the “hot spots” that are must sees in Iceland. 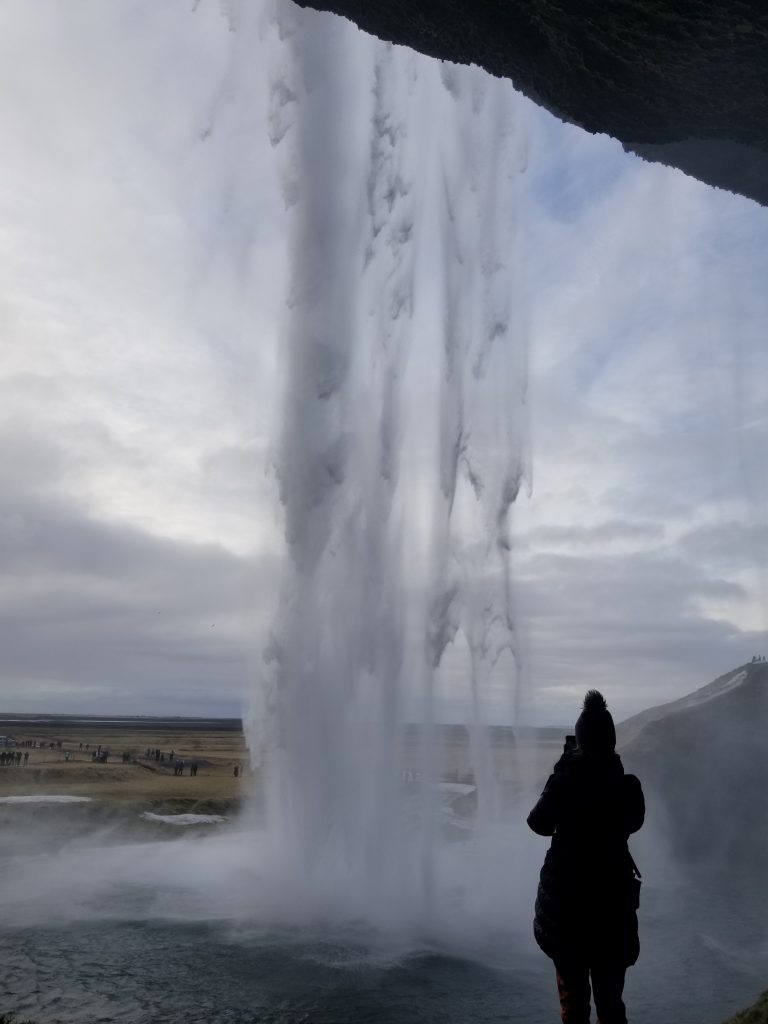 Climbing behind the waterfall, Seljalandsfoss 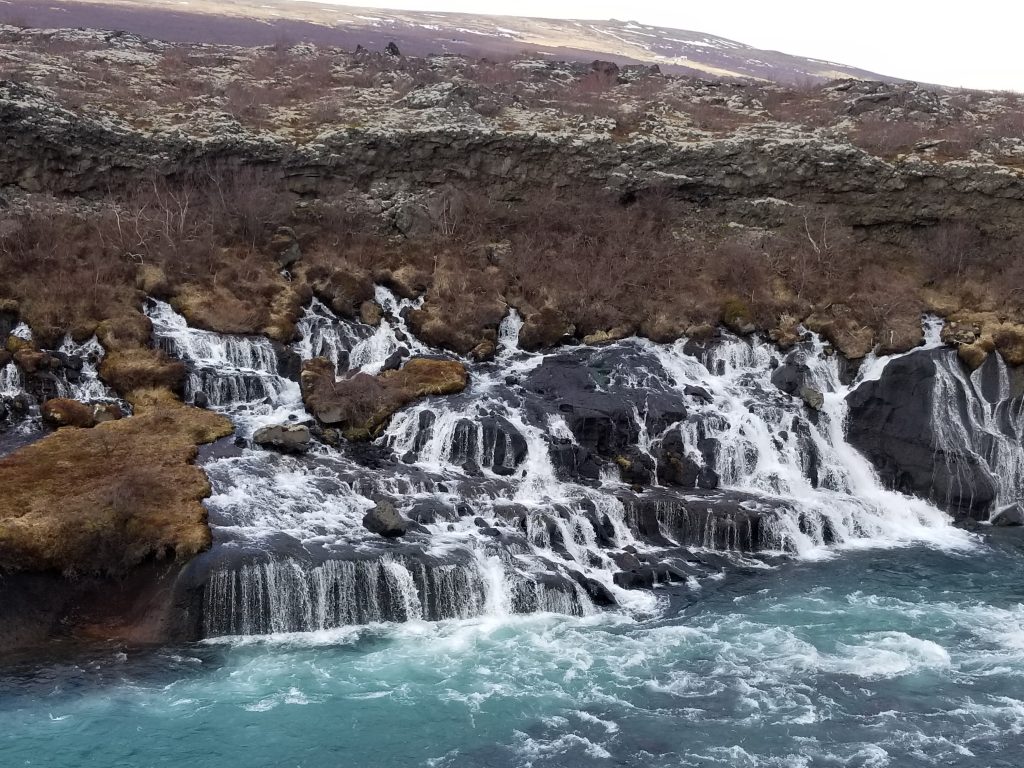 My favorite, the water seeps out of the earth making the beautiful Hraunfossar waterfalls. 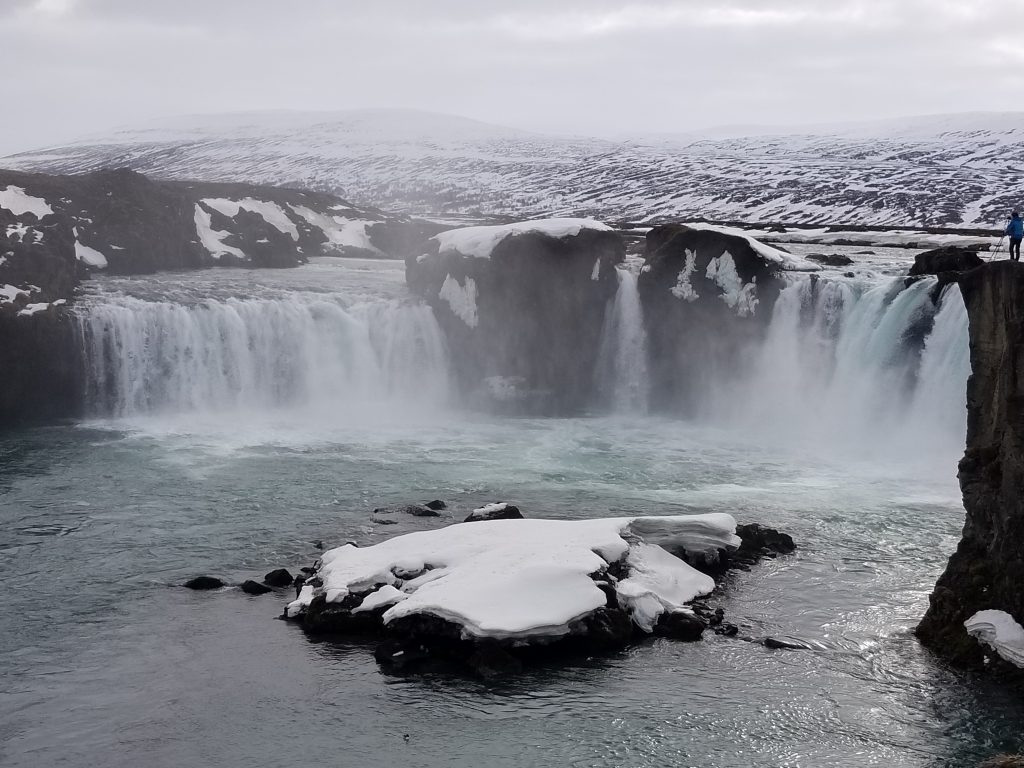 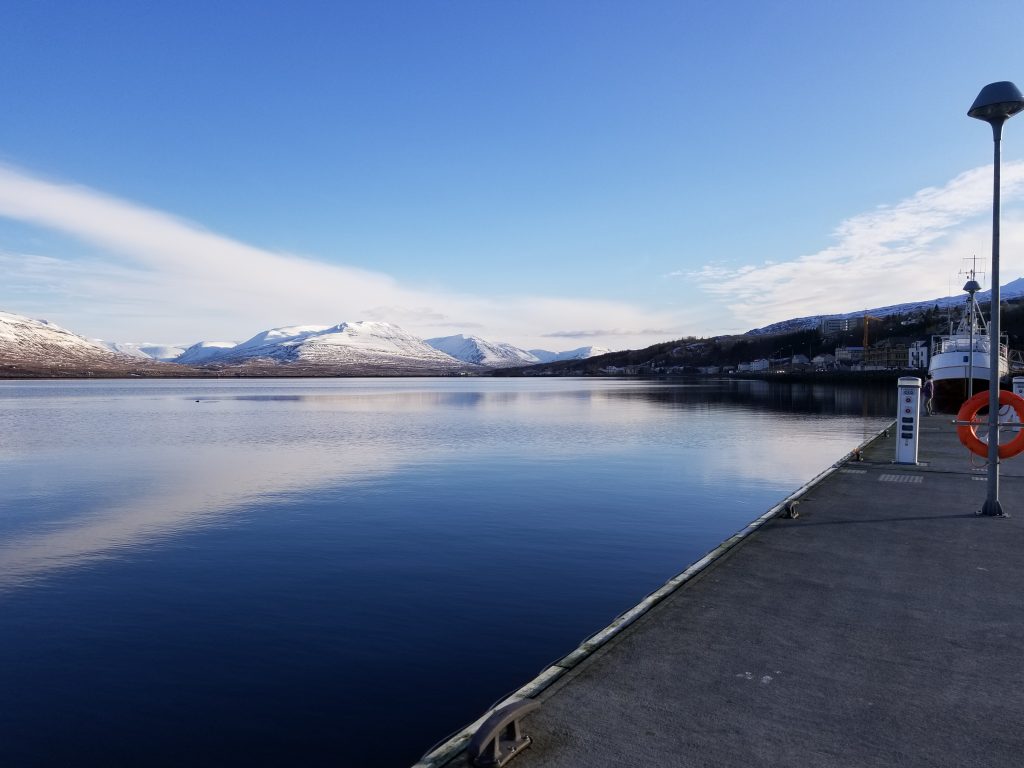 Schedule a phone call with me