Adventures in Budapest on our Danube River Cruise

Embarking on river cruise number 2. This time going to the north part of the Danube. Last cruise I ended in Budapest, this time I start there.

Our hotel, Novotel, is perfect. Right on the Danube, Buda side and facing the Parliment building. Quite beautiful views. Food is good too. Room is very nice, basic, has everything we need. This hotel was very well priced for its perfect location and amenities.

First day, after traveling overnight, transferring in Amsterdam at 5:30am, and arriving in Budapest at 10:30, was great! We were tired. One thing I will pay attention to in the future is the departure time from the US. Going to Europe only takes 6-7 hours, depending on your first destination and leaving at 5:00pm you really get no sleep time on the plane and arrive at midnight EST. A good way to mess up your body’s clock.

Budapest is divided into 2 sides with the Danube running in between. They merged in 1873. The first bridge to connect the 2 sides was built in 1849, each side of the river developing its own personality over many centuries and even today they are still very diversely different. The Szechenyi Chain Bridge,  this first bridge is guarded on both sides by lions. You can visit the bridge master’s residence and the 20 meter deep chamber of the chains. 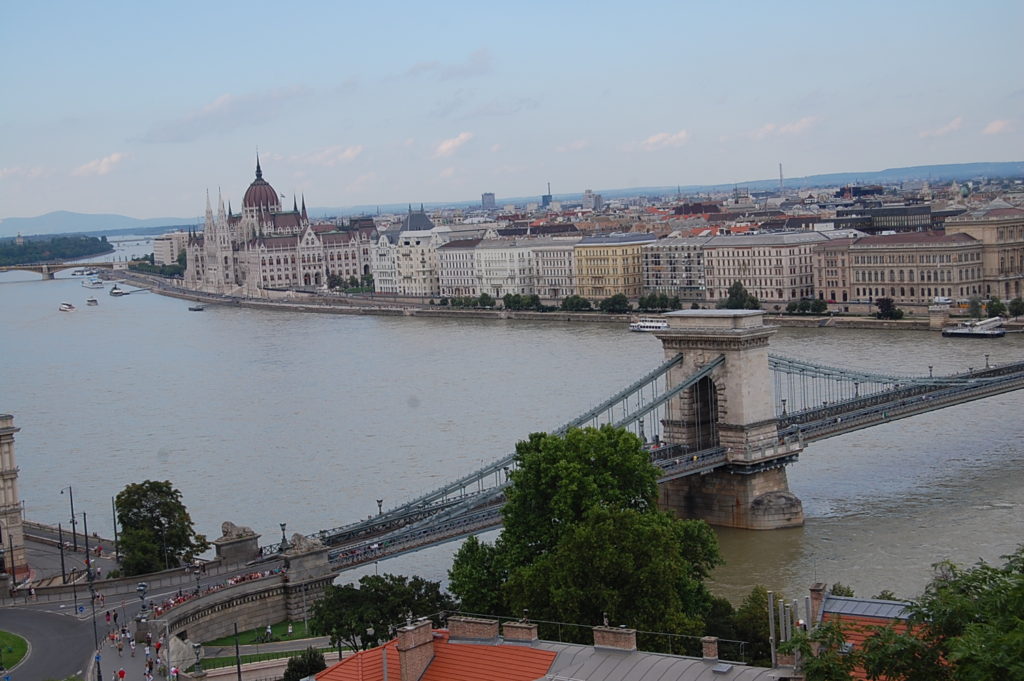 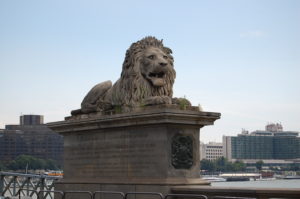 The main attraction on the Buda side is Buda Castle District. It is up on a high hill which you can reach via a funicular or walk up, climbing many stairs, our chosen route. At the top you can visit:

Being our first day, and with no sleep for over 24 hours, we explored the area, but only visited the Fisherman’s Bastion and Labyrinth in the Buda Castle. No museums for us today! One thing to note, St. Matthias Church was closed due to a wedding. If it is important to you to get inside the church, ask at your hotel for hours and special events there before you hike all the way up.

View from the top of Buda Castle Hill. 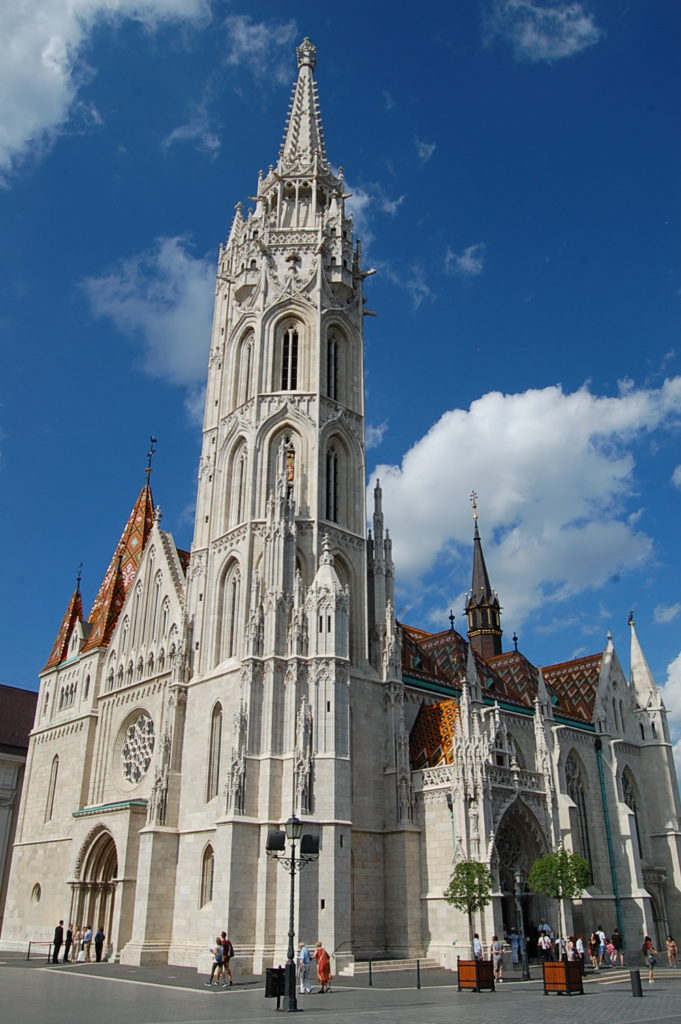 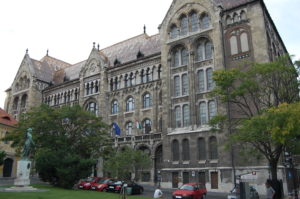 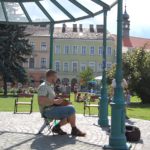 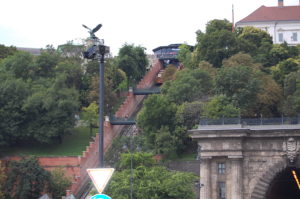 Take the funicular to the top, or hike it. Lots of stairs but not too difficult. 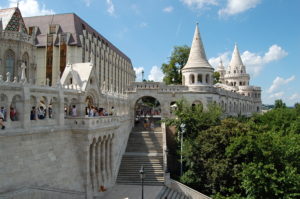 Fisherman’s bastion. There is a nice little cafe here. It also has terrific views of the city. 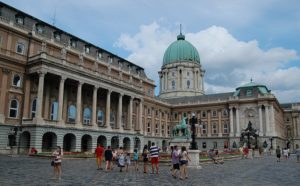 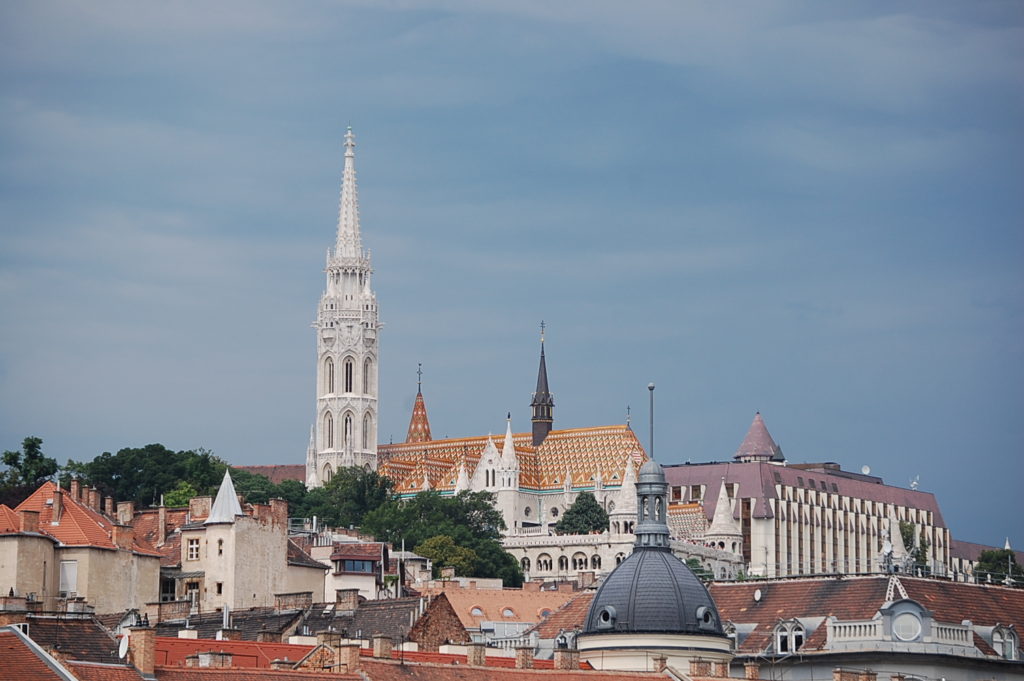 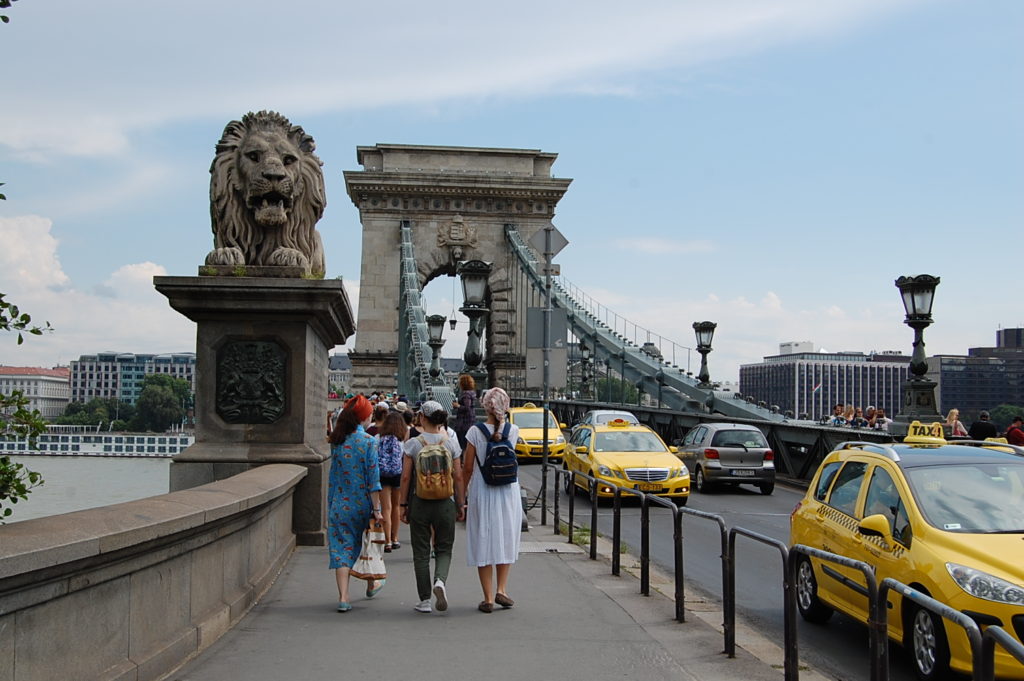 After a good night’s sleep, on to explore the Pest side of Budapest! The Buda side is quieter, has more residential areas and neighborhoods and Castle Hill is a sort of “old town.” The Pest side is the active side, with offices, people rushing to work, traffic, and what you would expect from city life. The buildings everywhere, on both sides, have wonderful architecture, are colorful, and often have details around the windows or on the roofs that are quite elegant.

A unique characteristic you will notice in Hungary are many roofs are made of Zsolnay porcelain tiles.

Pyrogranite is a very durable and very colorful type of tile used on the roofs of many buildings. This is made by the Zsolnay company. It is lovely to look up at the roofs of buildings around town and see these beautiful colors and patterns. 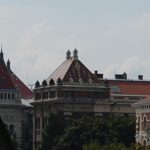 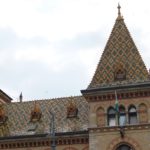 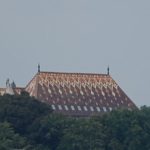 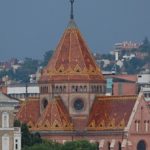 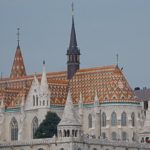 Budapest is a city for everyone.  Top 10 things to do when you visit Budapest: 5. Ride bikes to Margaret Island Park and while you are there take in the thermal spas for improved health

7. Visit the great market to sample some local foods and do some shopping. 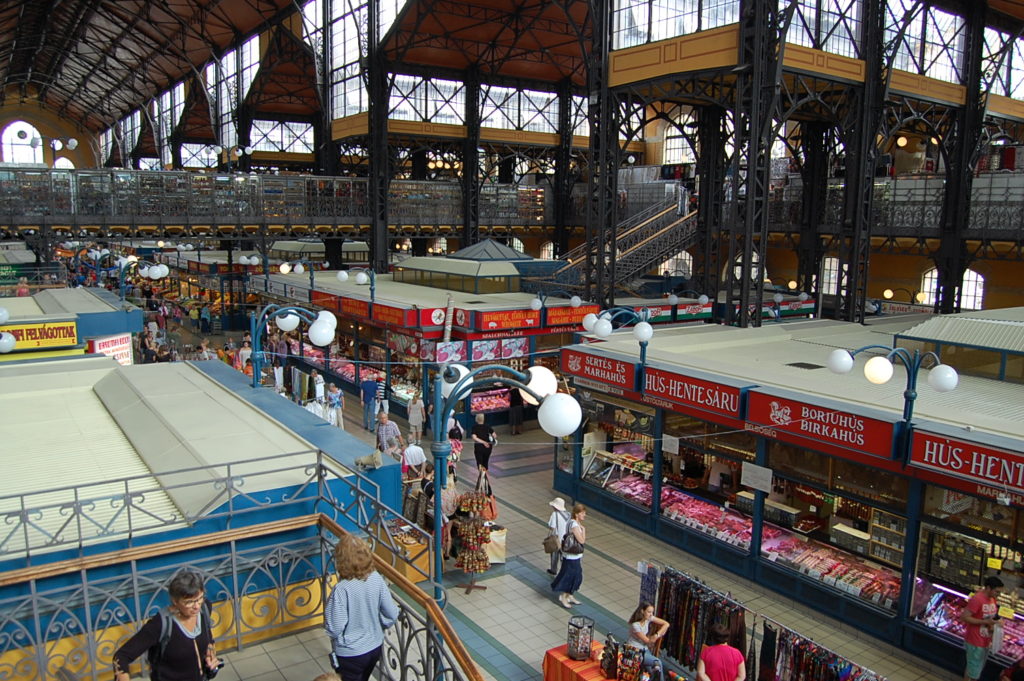 8. Take in a concert at St. Stephen’s Basilica. 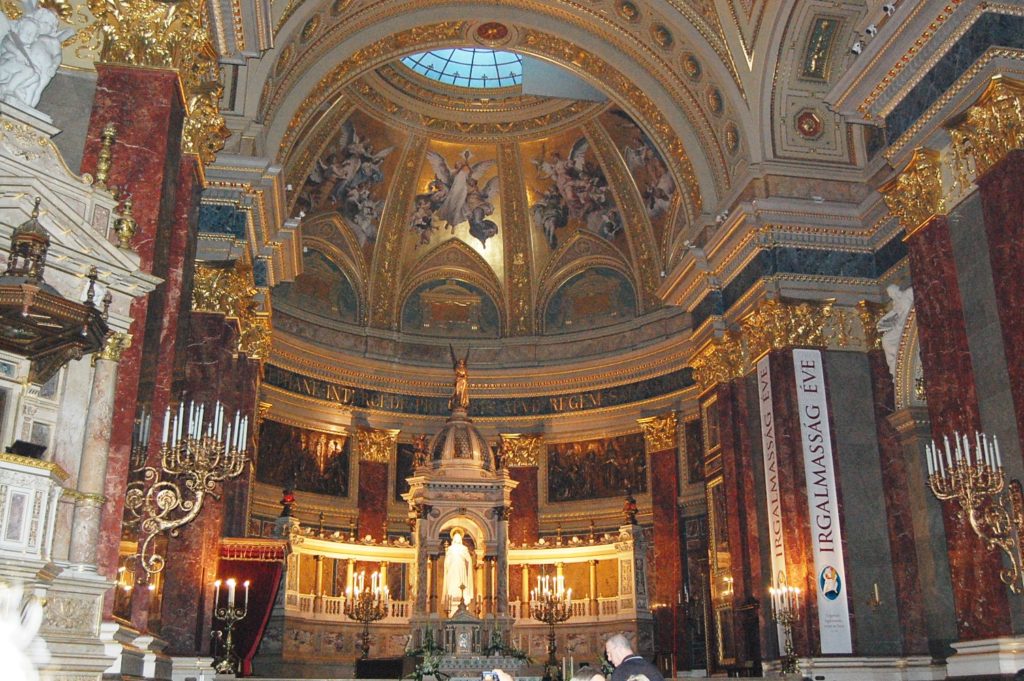 9. Have your destination wedding in Budapest in one of the spectacular cathedrals or the Great Synagogue.

Particularly interesting and moving is exploring the Jewish neighborhood in Budapest. My discovery began with the Shoe Sculpture. This was probably, for me, the most moving of all the things I learned. The film director Can Togay, conceived of the sculpture and then Gyula Pauer sculpted it. It represents the Jews that were forced to line up along the shores of the Danube, shot, and then their bodies fell into the river. It is so moving. You can feel the people standing there and the horror. The bravery of them as well. Quite moving. I had to sit there for quite a while as it all settled into my mind. 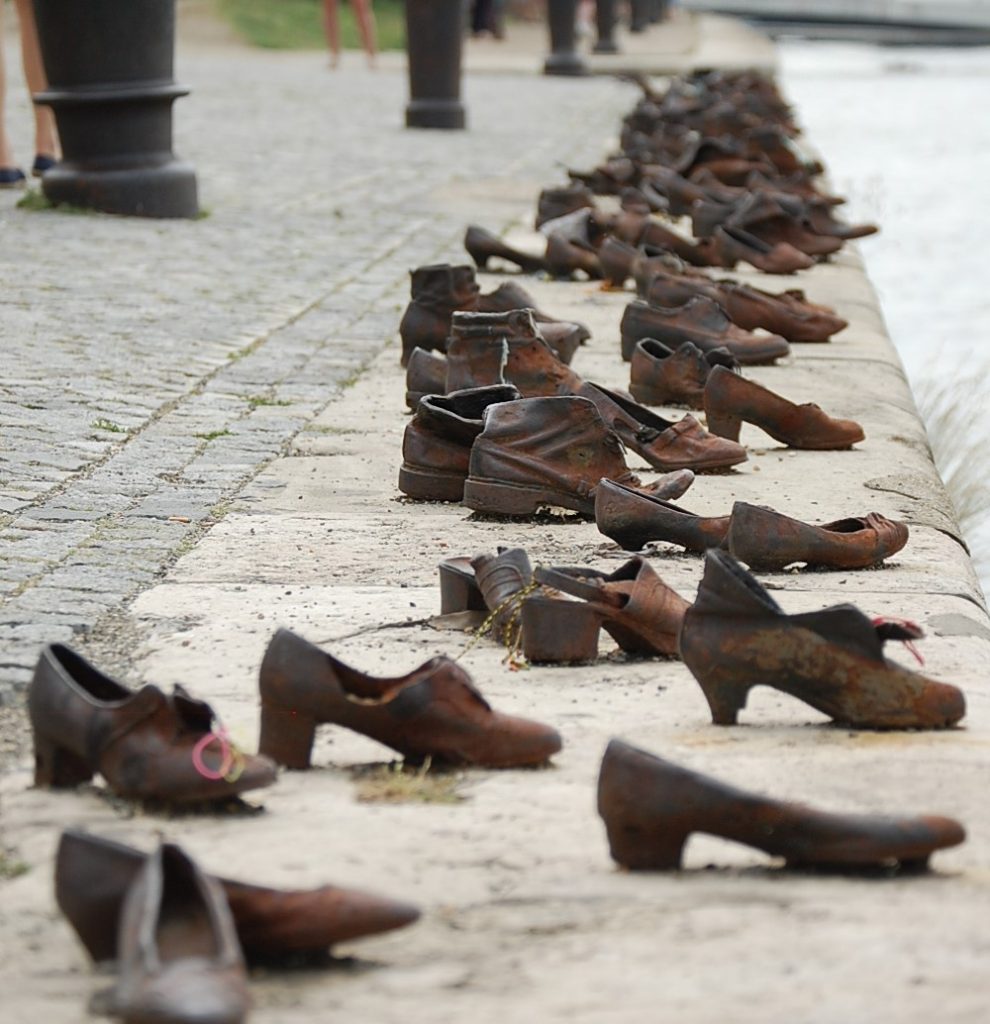 Walking into the old Jewish neighborhood, we found the Dohany Street Great Synagogue. It is the second largest in the world, the largest found in New York and the largest in Europe. The Synagogue can hold 3000 people. Its architecture is Byzantine and Moorish. What really amazed me when I entered was that it looked exactly like a church. Being Christian, I was totally confused and surprised. I expected something different. I learned that the Jewish community, with hopes of developing stronger relationships with all the people in the area decided to design the Synagogue after a church. There are 2 pulpits, an organ, stain glassed windows, and pews in similar set up as in a Christian church. Unfortunately, this didn’t really help build community and even in the Jewish community the traditionalists built their own temple, as well as the Reform group.

There are 25 torah scrolls in the Arch, taken from the synagogues that were destroyed in WWII. 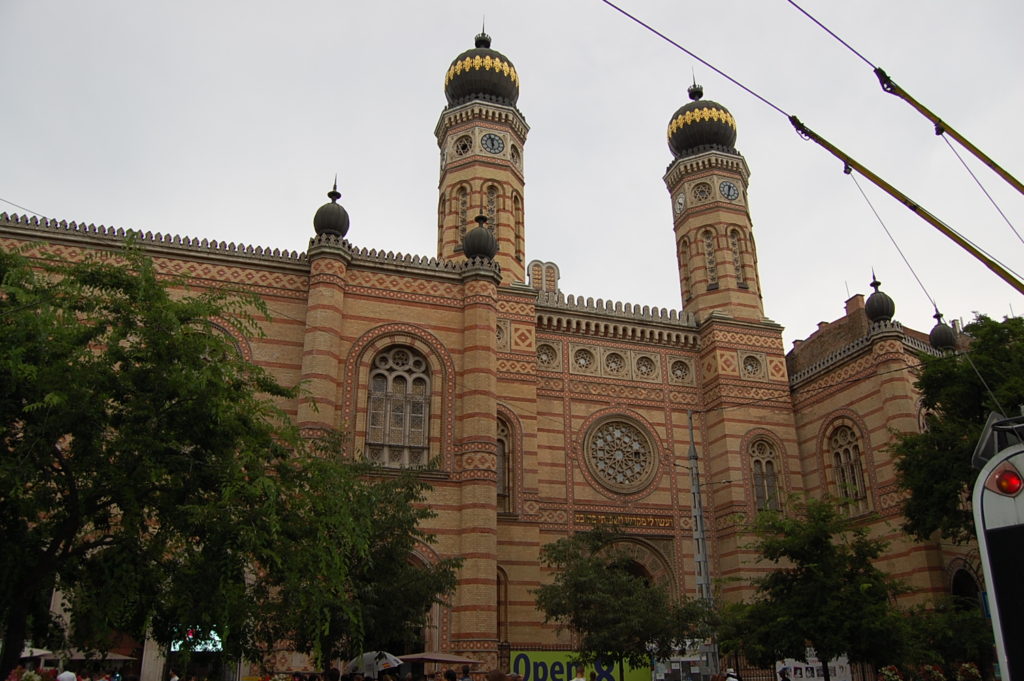 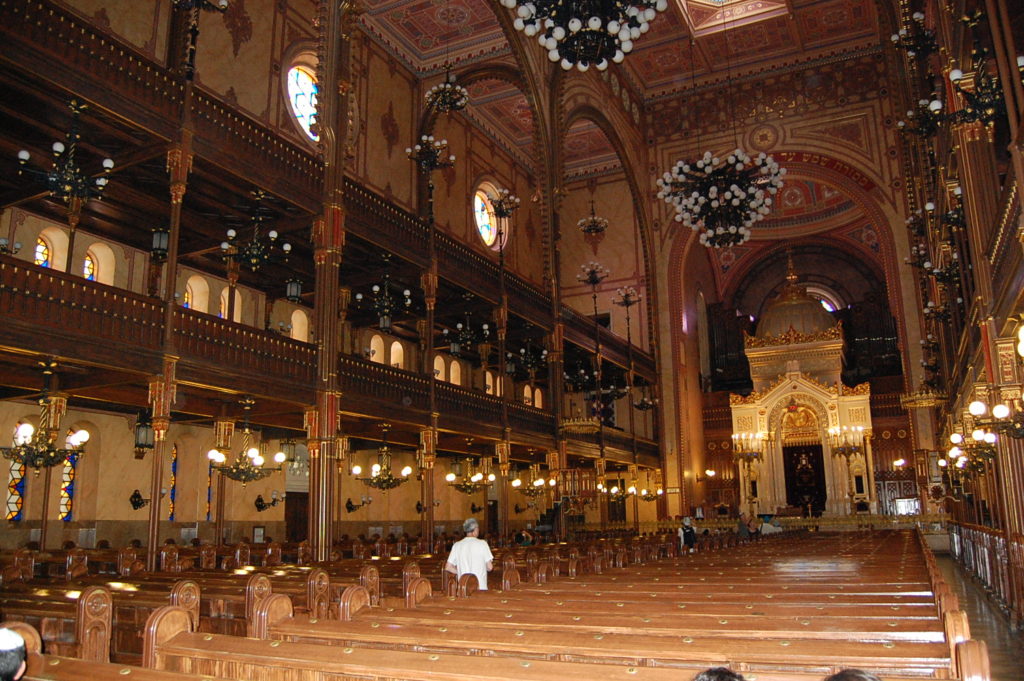 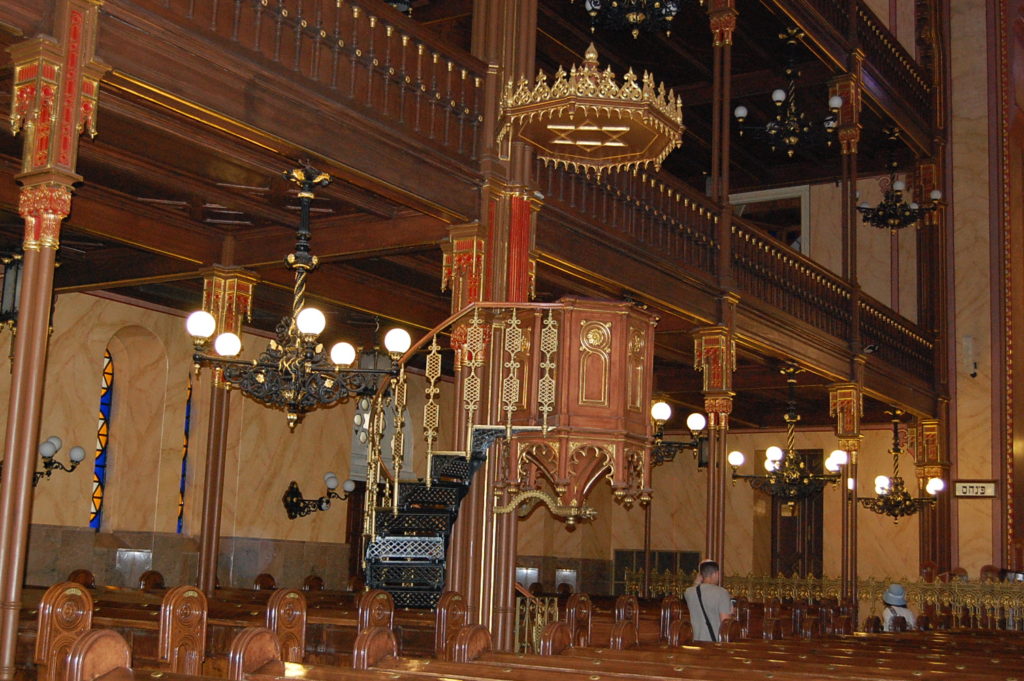 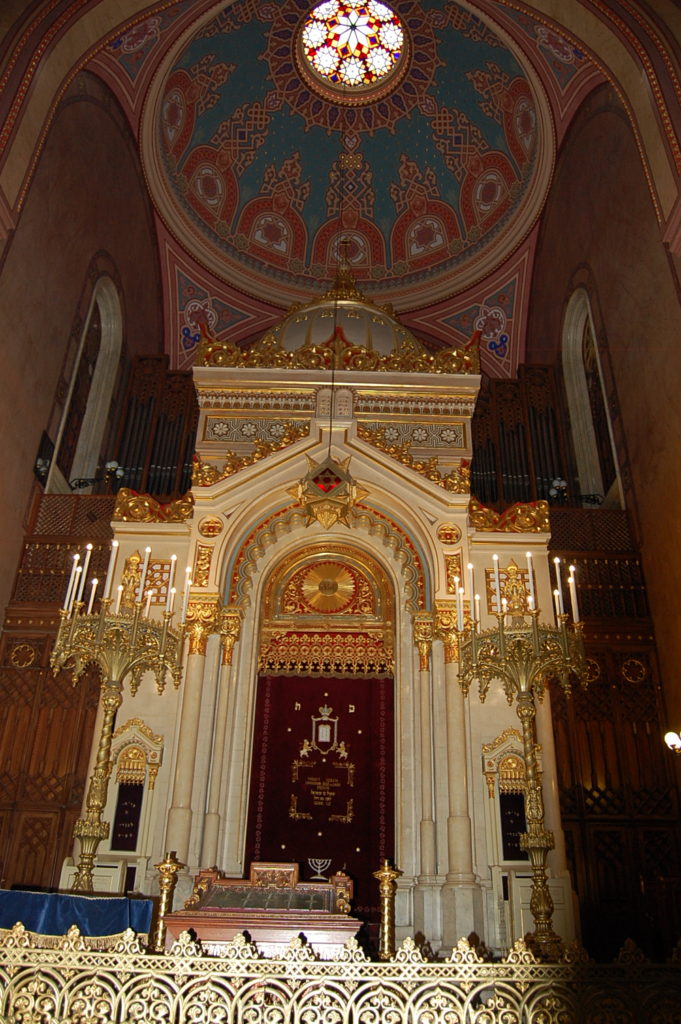 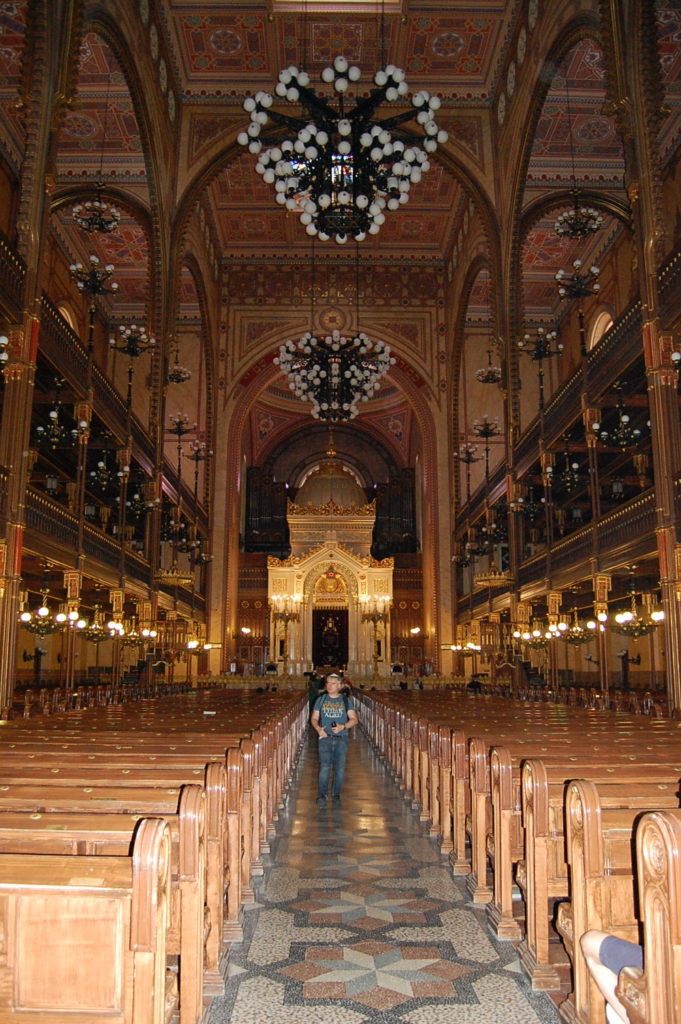 Within the synagogue is a memorial garden. About 20,000 Jews moved into the Synagogue during WWII. During a cold winter, 7000 of them died. Their bodies were put in a mass grave right in the courtyard garden. There are also plaques with the names of those who were lost, taken and murdered. There is another memorial wall with additional names commemorating those who died. 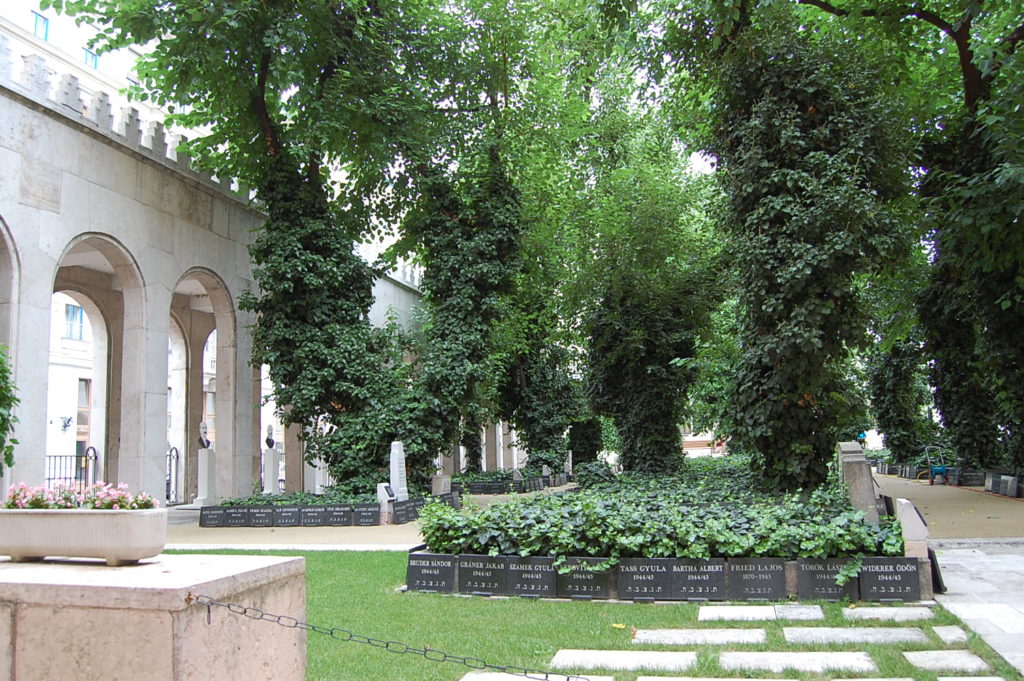 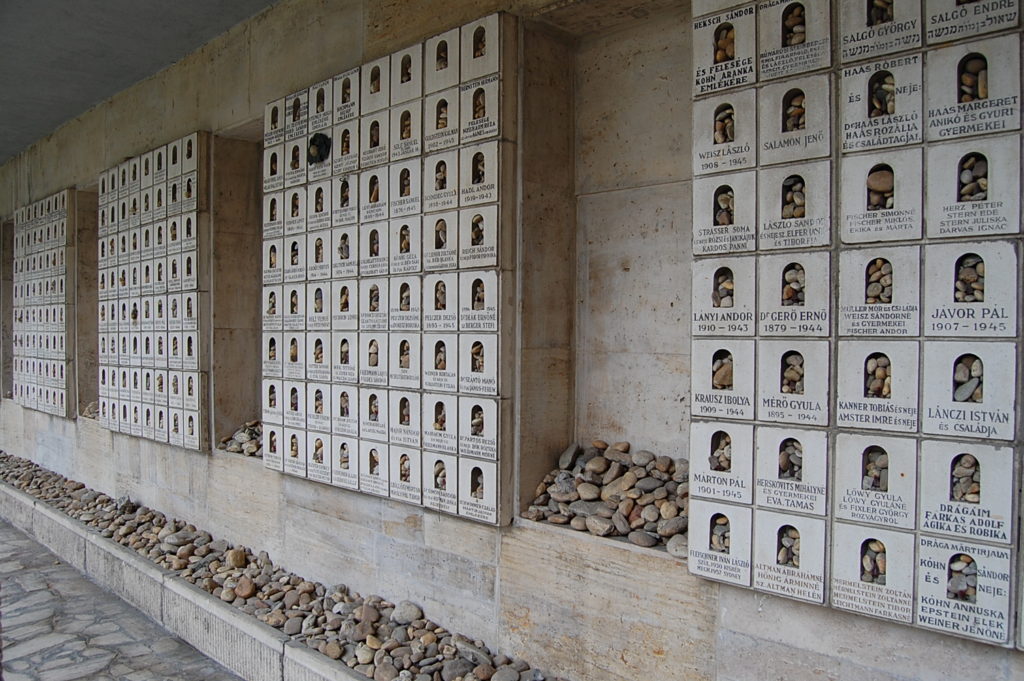 Very interesting Tony Curtis (the actor) in honor of his father Emanuel Schwartz, created a foundation to fund this beautiful tree of life. It is a weeping willow. Each leave on each branch commemorates a Hungarian Jew who died at the hands of the Nazis. It is so beautiful. When the wind blows, the silver leaves make a haunting clinging sound. 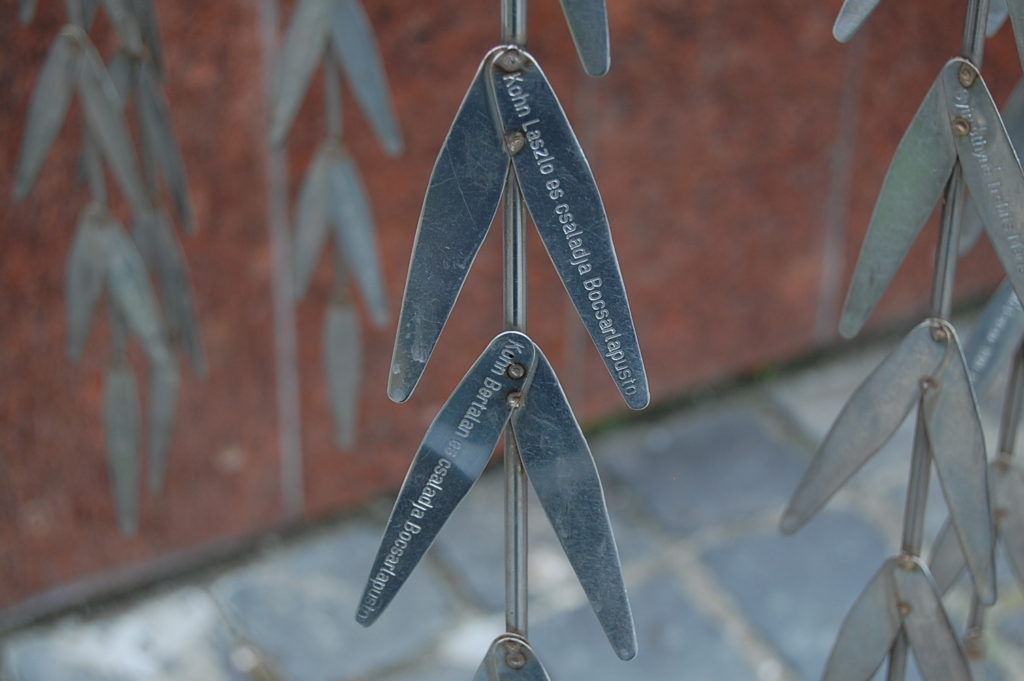 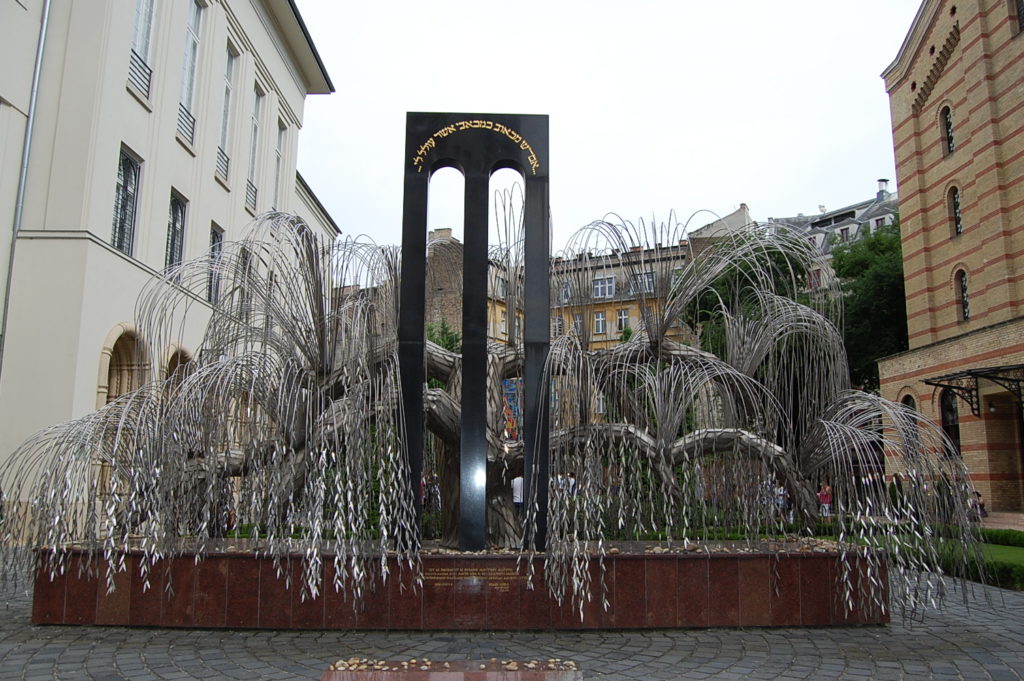 Our individual travels are at an end until Prague. Now we join our AMAWaterways river cruise on the Ama Sonata. The cruise begins with a night time loop around the Danube to see the illuminated buildings.  Then sleep the first night in Budapest and spend another day there. Donna revisited some historic sites with a guide to get more facts and details. I explored the market, a church built into a cave and the Gellert Hotel which specializes in thermal treatments, baths and pools. And then we were off!

Schedule a phone call with me